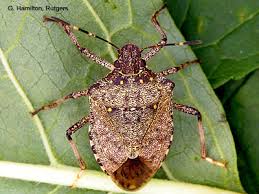 As if there aren’t enough odors to track down in a house that a dog, cat, fish and guys call home, now my first-born has introduced the stink bug to our abode.  Apparently, his university is situated adjacent to the international headquarters of the stink bug.

I did some hard and heavy research on Wikipedia, where I discovered that the scent of the stink resembles cilantro.  Another article, however, likens the smell to dirty feet.  Reportedly, they only release the odor if they are threatened, injured, or irritated.  My son claims that he has never smelled one, despite the proximity to Stinkbug International offices.  Judging by the potency of his laundry, however, I question his ability to discern nuances of such emissions.

So, the upshot is, don’t piss off a stink bug, or it might make a stinky at you.  It will behave like a tiny Pepe Le Pew.  Or like some of my students, who respond to many challenging situations with fart noises.  This inspires me to pioneer a new and improved aromatherapy application, where the feedback I give in the classroom might include “pretty smell” AND “stinky smell!” I wouldn’t have to say a word; I would just spritz my way into Teacher of the Year.

Oh, in addition, the stink bug will stink if you squish it.  Well, duh.  It’s just a matter of time ’til any of us will stink after being squished.  It strikes me as rather microcosmic of the larger truth: there are certain rather global expectations that one (or big, powerful more-than-ones) should be able to squish things, and not have to deal with any messy, smelly aftermath.

As for OUR stink bug, we had an understanding–I have a knack for sweet talking bugs into strategically placed juice glasses, and the little fella toddled right on in there.  I released him into the wild, thus amplifying the invasion of this non-native critter that hitched a ride from Asia in some container.. .

I wonder: what stinky, non-native creatures hitched a ride on those vessels that lost their way five hundred twenty years ago?

6 Responses to “Columbus Day Ode to the Stink Bug”

Life as a sandwich generation x’er, stacked with irony. As a ‘normal’ person peering out from the boundaries of suburbia, as a transplant from another state, maybe another planet. As a mother of teenage boys and freelance working writer balancing parenting with helping to care for my mother. And now as an only child of a mother with Alzheimer’s (which sucks).