I wanted to use Roman numerals, in my heart of hearts.  But instead, it is my sad duty to report to you that your hard-won literacy in the Roman numeral is obsolete and undervalued in today’s world.

For a long time, students could learn the workings of the Roman Numeral system, and use it for one thing for the rest of their lives:  to figure out the year that a movie was made , because that is how they showed it in the credits.  Ones with extra high aspirations might even figure out that quaint convention of numbering a particularly unreadable portion of some text, using, of all things, lower case Roman numerals.

My point here is that there was something to be said for teaching kids stuff that they could actually do.   You could take a Roman numerals quiz and pass it and feel a little bit capable and smart.  Kids felt like freaking geniuses when they got that lower case mumbo jumbo.

Sadly, our new and improved loyalty to the idea that the only worthwhile learning involves super-rigorous, problem-solving, multi-step tasks has left many of my students feeling like they are stupid and unsuccessful.  And their inability to perform on densely worded assessments keeps pounding that nail even further into them.

Come grading time, we teachers write grades and comments that essentially say things like, “Your kid can do this and this and this! And that will never be enough to pass! Please read with them for twenty minutes every night!”

But enough of my silly rhetoric.  You’re here for the down-and-dirty of the report card world, the comments that I would write, if I could write anonymous comments.   So here is this quarter’s offering:

Lisette is an active girl with a love of art. She struggles with decoding words, and should be reading her sight word list at home.

Lisette startles me one thousand times a day when she appears two inches to my left, stating that she has a sore throat.  You may want to have her throat removed. If she gargles any more salt water, the nurse is concerned that she may contract scurvy.  Oddly, her throat never hurts at snack time, or at lunchtime. Please keep her crayon-filled pencil box at home, as I have run out of room to plaster her rainbow heart pictures, completed in detail while I am attempting to help her to practice the concept that 10 rainbow hearts are more than 8 fluffy kitties.

Butch can add single digits within 10, and loves art.  He does, however, require frequent reminders about using self-control in all settings.  He will be bringing home handwriting practice so that he will be better able to show his knowledge in writing.

Butch knows that if there are six pencils in the classroom pencil jar, and he takes three of them, he will have a total of 72 pencils in the deepest recesses of his desk.  If he removes the eraser end of 21 of these, he will double the number of pencil points that he needs to break each and every day.  He dwells in a place we call La-La-Land, draws designs on his arms using dry erase markers that are worth their weight in gold, and repeatedly claims that “It’s a tattoo.” If I had a dollar for every time he falls out of his chair, I would be on a cruise around the world.  He alternates walking like a Nazi soldier and a Cirque de Soleil star on Red Bull.

Sammy Davis III  is a bright boy who gets along well with peers and adults.  I am confident that he will become an academic leader, as he develops self-control with his tendency to talk during class.

Sammy’s cuteness is outdone only by his ability to annoy with incessant talking.  However, his propensity for paying teachers compliments on wardrobe, jewelry, and choice of homework will serve him in good stead, in school and beyond.  I expect Sammy to run for public office, probably before his sixteenth birthday.  Just call him the Candyman.

I read a blogpost earlier that was addressed to the Freshly Pressed Olympic Selection committee: Dear WordPress…What Am I, Chopped Liver?.

I was inspired. In an effort to determine how long I have been blogging, and therefore how many days I have succeeded in avoiding becoming Freshly Pressed (face it; it sounds a bit painful, after all), I found a cool site that does that figuring out for you!

What coolness yonder breaks!  Go there if you are practicing constructive procrastination!

Remember the old days when you had to do some fancy paper-pencil calculation to figure out such irrelevant drivel? I, for one, am offering up a prayer of gratitude for this heretofore undreamed of convenience!

Which reminded me of how lucky I am to have an automatic washer, unlike that poor osteoporosis sufferer-in-training above, who delighted in the state-of-the-art wringer machine she received one special Mother’s Day or anniversary.  Diamonds, schmiamonds.

I am guessing that that wringer action is what being Freshly Pressed is like.  This is my response to my friend Princess Rosebud‘s post bemoaning her own tenure as an NFP (Not Freshly Pressed) blogger: make it cool to be NFP!  I’m at 631 proud, mediocre blogger days.  I have also managed to keep my Twitter following down to exactly 20. That’s some exclusive club, man.

Further research led me to this gem, a blast from the past from Le Clown, who has since been Pressed.  Good to know that we were, at least for awhile, in good company.

I’ve determined that my cosmic chemistry (which happens to also be a popular elective at the University of Phoenix) has positioned me to attract the bleeding and infirm of our young learners.  Within five minutes of the arrival bell on any given day, you might peek into my room and think that I was wearing a velcro suit, by the looks of the three-to-five children who are attached to my sides and burrowing into the folds of my clothing.

A year and a half ago, when I embarked upon the blogging journey, I speculated that I might owe the school nurse a case of wine or six.   At this point,  I need to look into buying her a timeshare in Boca Raton.

“Okay, put your head down, let’s see how you’re doing at gym time.”

After gym, “My stomach still hurts.”

“Since you just performed ‘Flashdance,’ let’s sit down for more than eleven seconds and see how you feel.”

“Honey, how about you write down exactly where your stomach hurts and when it started and what you ate today.”

“Ms. Peachy, I was looking in my desk for my pencil and I hit my head on the desk.  Can I sharpen my pencil? And my stomach still hurts.”

Child skips out of the building during fire drill.

Upon return, her stomach—well, you know.

“You made it to the end of the day! Yaaay! Great job! Go get your things to go home!”

Don’t judge, people.  I am not insensitive. This is a daily script.  Oh, and don’t quote me the old teacher comeback, “Show me the blood.” My kids are happy to show me the damn blood, dripping down their legs, arms, eyelids.  And their compassionate classmates make sure to alert me of each and every bloody incident.  My own little Blood Alert Posse.

At least I am not Miley Cyrus’ TV stepmom once removed.

The Cookie Business: A Young Writer is Born October 13, 2013 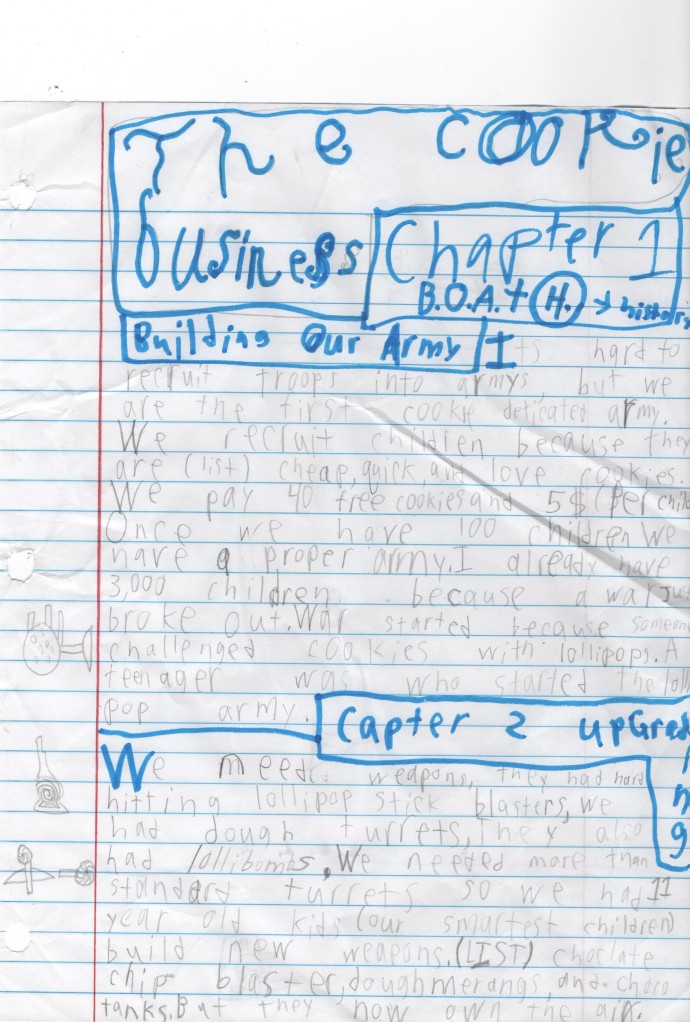 My son carries on the family tradition of writing weird stuff.

The Cookie Business. Chapter 1 B.O.A.t H history.
Building Our Army
It’s hard to recruit troops into armys, but we are the first cookie deticated army. We recruit children because they are (list) cheap, quick, and love cookies. We pay 40 free cookies and 5$ per child. Once we have 100 children we have a proper army. I already have 3,000 children because a war just broke out. War started because someone challenged cookies with lollipops. A teenager was who started the lollipop army.
Capter 2 UpGrading
We need weapons, they had hard hitting lollipop stick blasters, we had dough turrets; they also had lollibombs. We needed more than standard turrets so we had 11 year old kids (our smartest children) build new weapons. (LIST) Chocolate chip blaster, doughmerangs, and choco tanks. But they now own the air.

I promise to update as new chapters become available. Obviously, he follows a painstaking editing process.

From the World’s Top Ten of Anything and Everything, an appropriately lazy reblog.

Today, I asked my class of seven-year-olds to write about a time when something happened that caused them to feel a “strong feeling or emotion.”

One little boy wrote illegibly.  He struggles with reading and writing, but he tries so hard.  He related something that happened less than a year ago.  This is what he read to me:

“I felt scared when my dad was beating up all these people. They were fighting in the road and my dad got hit by a car and I never saw my dad ever again.”

Another boy wrote, “Once someone broke into our house and killed my brother. I felt so sad.”

Also today, a newspaper article revealed that our urban district’s teacher ratings were largely substandard.  We teachers, on the other hand, have yet to receive that information.

None of this makes a lot of sense at the moment.  No neat blogpost wrap up.

This is one of them.

My son ran across this page in one of my cookbooks.  I probably cooked these evil morsels and wrote this upwards of ten years ago.  These are the very notes I added on that fateful day.   I resented this recipe for a long, long time.  But perhaps this goes without saying. . . As you can see, I was a passionate cook, even then.

The title, “Hell’s Kitchen” was, it seems clear to me, created due to the existence of this recipe. If, for any reason, you find yourself tempted to Google this recipe and try it, know that this temptation is arising from the bowels of the underworld, and that nothing pure and holy can result.