‘Tis the season when the teachers begin to speculate about alternate  professions.

I’ve decided to become a Specialized Extreme Couponer ®!  Deodorant only.  I’ve noticed, in the tens of minutes that I have devoted to researching the topic, that the coupon people always have lots of feminine products (like, enough for women of biblical lifespans who never go through menopause). Therefore, I will not be targeting that area.

However, I am hopeful that I will have big success in selling some clinical strength anti-perspirant on the deodorant black market. It’s got to be at least as lucrative as this blogging gig!

Another possible avenue I am considering is the ripe market of Sierra Leone! But not for deodorant. That would be insulting at best.  I think we need to be looking at macaroni and cheese couponing here.  I have a feeling that the generic mac and cheeses are few and far between here, and that Kraft is sitting on a big fat monopoly.  Let’s make a difference, people. 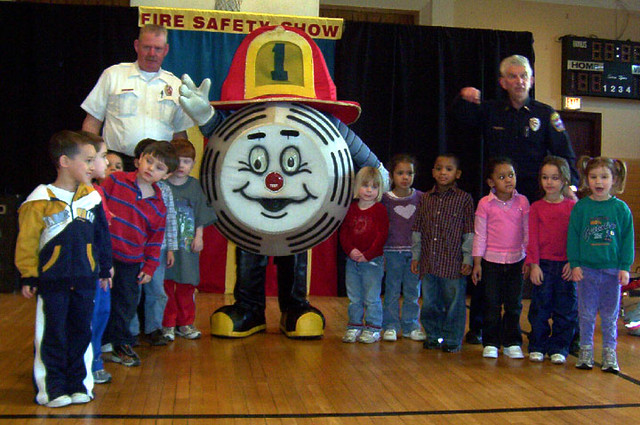 Recently, our school hosted a Fire Safety Assembly.  The second and third graders—all 200+ of them—filed in, sat down, and behaved themselves while the blockbuster DVD, Hector the Smoke Detector, was projected in all its splendor.  A few  years ago, the fire department had abandoned the live mascot in costume, presumably due to the fact that the costume had become increasingly grimy and flaccid. I guess they didn’t want to give kids the impression that smoke detectors were constructed of giant flour tortillas.

The gentleman who presented this year was energetic.  Fervently so, really.  I knew that something was awry, though, when he called on a student to demonstrate how to “Stop, drop, and roll,” THEN proceeded to bring each of the nine classes to the front of the auditorium, where the kids lined up, enchilada style, on the floor in glaring violation of the gospel of personal space that we preach day in and day out.  It is a miracle that no one dislocated a clavicle.

This was, however, a mere preview of the ultimate evidence of divine intervention witnessed that day. For when the youngsters had returned to the upholstered seats, bouncy and kicky as all hell, Reverend Firefighter called upon each and every child to pray to be rescued if they were ever trapped in a fire!

The final act involved having every student drop to the ground as if crawling below the smoke, then complete the enormous square of auditorium aisles on  hands and knees.  My students were now not only prepared to respond to a fire emergency, but to a European soccer riot as well!

Did I mention that I had a new student that day? He channeled James Brown in the aisle of the auditorium.