Sharp pain at the fact that he will not be adding more volumes, once I have exhausted the rest of his published stuff.

Big baby, I think—you don’t get sad that Shakespeare is dead and won’t be contributing more to the Complete Works.

Some folks are prolific enough.

If I read or hear the phrase “New Year, New You” once more, it is very likely that I will throw a slipper.  A new one.  A Christmas  present–from me.

That is because my aspiration for 2015 is to wear them as often as is humanly possible.  I can do it.  They have  rubber soles that will help me to disguise them as shoes should I accidentally exit the house before spring.

If I can tell  you where my slippers are, then I don’t need another de-cluttering checklist. 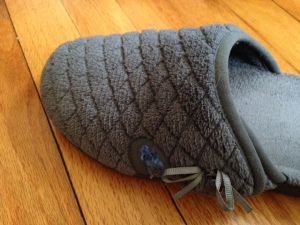 My super-achiever sensibility has filtered down to my 10-year-old son as well! HE just took a shower! Hot damn. Happy New Year!

In addition to hygienic prowess, he also managed to work the term “crap-ton” into conversation twice in twenty seconds. You gotta respect that.

Type A Together People out there, I love you.  But I am aware of the fact that you may be picturing us in a Judgy show about New You-ness, with you as Simon Cowell and me as me.  I know that you buzzed me or dinged me or gonged me back in the introductory slipper section.

Hang on for just a second there, Simonizer.  In my defense, let me tell you about how things transpire when I follow a more conventional checklist in an effort to adopt new and glorious habits just because the calendar isn’t working anymore.

On New Year’s Day, I opened the napkin-light bulb-water bottle cabinet.  Predictably, I was assaulted by a lot of water bottles, and a couple of the other things.  So I “de-cluttered” it.  That just means that I took everything out of there and organized it into matching containers labeled “Donate,” “Sell,” and “Trash.” Then I went to find a rag under the sink, where I keep 2 or 3 on a regular basis. I am proud of the fact that I do not keep 17.

Guess what I found under the kitchen sink?

If you guessed “A crap-ton of water?” you are correct!

Now it was time to de-clutter THAT cabinet.  Time to throw away another crap-ton of those white sponges that claim to erase anything, but do not erase pencil marks made by second-graders–but that is another arena.

The drain was leaking. It was nasty.

Backstory:  our kitchen faucet (not the aforementioned drain, mind you) has been doing some low level dripping for a couple of months.  Here was the perfect opportunity to fix it! Wait! I know! Since we have to do intensive sink intervention, we might as well do a teeny-tiny upgrade and buy a new faucet!

Yaay! Crap-ton of crap everywhere and we are off to the big orange store where people get things DONE! But NOT a new faucet, because in order to do that, one has to lift that sink out of its sink hole.  Our sink, however, was apparently sealed into place with the same sealant used to seal stuff on the space shuttle or the Millenium Falcon, and a crap-ton of it.

The point is, Simon, that I transformed a de-clutter checklist into a full day of plumbing.  I don’t know a lot about plumbing, but the one tenet of plumbing is that when you work on plumbing, you cuss.  Like, a crap-ton. I ended up manning the screwdrivers under the sink a lot, too, on account of the fact that I am smallish and can fit under there.  And you KNOW there wasn’t just one trip to the store.  No New Year, New Faucet.  Oh, the humanity.

life is always sweeter and yummier through a lens. bunnyandporkbelly [at] gmail [dot] com